Wandering through the distillery district the other night I stopped to look at some large aerial photos on display outdoors along one of the cobblestone lanes. I was attracted to two particular photographs, one of the Euphrates River and one of the Caspian Sea. All the way home on my bicycle I kept thinking of the names of those incredible bodies of water, and I sat down and typed this story, a fictional story about love and the way it rambles.

The river flowed both ways. The current moved from north to south, but the wind usually came from the south, rippling the bronze-green water in the opposite direction. This apparently impossible contradiction, made apparent and possible, still fascinated Morag, even after the years of river-watching.
The Diviners, Margaret Laurence

Caspian                Euphrates
I knew there was something wrong when he changed the names of our twin cats from Tabby and Puss to Caspian and Euphrates. They were both sixteen at the time and I tried to explain to him that they were too old to change and they would never be able to learn to respond to such exotic new names. He got angry with me and shouted something about those names not being at all exotic to people who lived in Syria, Iraq, Russia or Kazakhstan. I'd like to go to those places some day, and learn how to love them.

I don’t know how he did it but he proved me wrong within a day of the sudden movement from classic cat names to the names of a river and a sea. They both began to respond within hours of the change, and as much as it pains me to admit it, they immediately struck me as twin cats who should have always had the names of huge, exotic bodies of water. 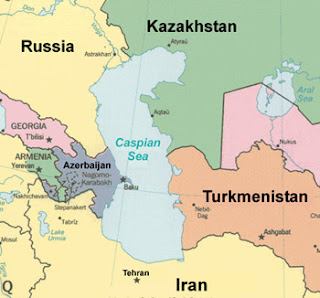 The fact that I had told him over a decade and a half ago that a cat can’t have a twin didn’t deter him from calling them twins when he brought them home from the shelter, so whatever possessed me to think he would reconsider a name change so late in their lives I will never know.

Boy, was I ever embarrassed, at the age of fifty-five, only minutes before dumping me, when he told me that cats can in fact be twins. I just assumed, all my life, until the breakup, that because litters were usually more than two, the concept of twins just didn’t exist in the cat world. That was so like him, to secretly keep vital information from me. Information that might have alleviated my status as an idiot savant just a little - just enough to make me feel just a little bit less like some pseudo-intelligent asshole. Silly me. An egg is an egg and when a single egg produces two offspring, well, that would be twins, whether they’re kittens or human babies. Who knew? Apparently I didn’t…

The day he changed their names was the same day he kicked me out. So, understandably, I was in no mood to consider the huge emotional strain of not only losing custody of my beloved kitties, but also having them lose their identities to some misplaced notion of aquatic exoticism - that was too much to bear. So I sat him down and forced him to explain to me - why now? Why, after all these years, did he feel the need to pull the rug out from under all of us, kicking me out and changing their names? It just didn’t seem fair, not to mention sudden, traumatic, and completely uncalled for. It wasn’t like I had cheated on him with someone he didn’t know, or, now that we’re on the topic, someone he hadn’t already cheated on me with. But he didn’t know that I knew about that, and I couldn’t tell him or he would find out how I found out, and that would just open a whole can of worms that would make me look far worse than I could ever make him look. So I just accepted his explanation that he needed a complete break due to my infidelity and the cats had to seem different somehow - and then I moved out the next morning after terrific breakup sex, and finally persuaded him after a couple of months to let me have some feline visiting rights. I missed Caspian and Euphrates so much it made me lose ten pounds in a month. I could stand to lose some weight but I couldn’t stand to lose complete contact with those two gorgeous fucking cats.

He did send me a beautiful card though. It was a sympathy card, and he said he was sorry I was such a prick. But I saw beauty in it, especially the part where he told me that rivers and seas run into each other whether they like it or not, like we did sixteen years ago, like Tabby and Puss did in their mother’s womb, surrounded by a bunch of other kittens who weren’t even twins, and that he was just feeling worn out by the banal inevitability of life and love.

It rained the day I finally lost it, mid-August, six months to the day after he dumped me. It had been a very humid morning and afternoon, filled with sunshine, turning grey by dusk when thunderstorms gradually burst through a huge, menacing sky. I just packed up my gear around nine and set myself up in the backyard, in the midst of a relentless downpour, behind the garage so he wouldn’t notice that I was there right away. I just couldn’t stand spending an elegant night filled with beautifully designed rain and thunder and the sharp explosive cut of lightning sheets so far away from the three creatures I had loved more than anything else in the world. More than Iraq or Kazakhstan or any place where strange names seemed normal.

And there he was, standing on his back porch - formerly known as our back porch - calling their new names at the top of his lungs. He was old and radiant in the pouring rain, and if I hadn’t seen him, through the window, pacing the kitchen floor a few minutes earlier, I never would have known that he was crying. When he came out into the rain, his taupe tank top glistening, his perky little pink nipples erect and drowning, his lovely little swollen tummy protruding, I knew it was the right time. So I made him cry harder by luring his de-familiarized cats under the cover of my sagging pup tent. And there I sat, with them both purring in my lap as I dried their soaking backs, paying no attention to their own brand new names, and thanking some feline deity from the bottoms of their twin souls for giving them two people who loved them equally and hated each other with such fearless and sudden abandon.

It turns out that I would wait until morning to return the cats and decide whether or not to take the stolen handgun from my backpack and kill him for being such a callous ex-lover, almost as callous as I had been, but not quite. He should have known better. We were meant to be together, like a river and a sea, whether we liked it or not.