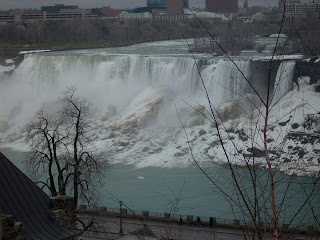 a hawk, a raven
or the 13th giant blackbird
or a crow

too faraway to know

blushing, wanting robins, daffodils, and sparrows
uneven petaled daisies in a field
of sentimental hoeing down
among the gay’ish signifying cornfields of his youth

but he saw a hawk, a raven
or a blackbird or a crow
close enough for kinship
too faraway to know 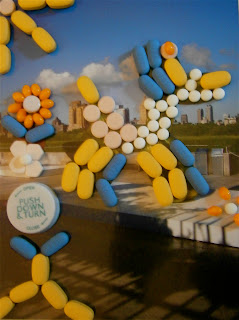 my MEDS on the roof at the MET

one wife, two daughters
his wife had a twin sister
it was a perfect transnational
border-crossing life
shot through with the conflict
of being a gay man trapped in a straight man’s body

a Canadian expatriate - a beautiful river of misidentified love flowing between borders, like too many similes caught in a windstorm… 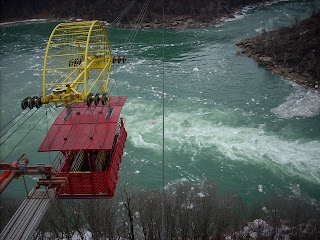 Origin of the name Buffalo

It is believed that the City of Buffalo received its name from the creek of the same name[citation needed]; however, there are several unproven theories as to the origin of the name of the creek. Early French explorers reported the abundance of buffalo on the south shore of Lake Erie, but their presence on the banks of Buffalo Creek is still a matter of debate, so the origin of the name of the creek is still uncertain. Neither the Native American name ("Place of the Basswoods") or the French name ("River of Horses") survived so the current name likely dates to the British occupation which began with the capture of Fort Niagara in 1759. The British engineer John Montresor mentions the name Buffalo Creek four times in his journal of 1764, indicating that the name was in common use at that time. Another argument is that the creek is named after a Native American who once lived on the bank of the river, but there is no evidence to support this theory. The claim that the name is an Anglicized form of the name Beau Fleuve (beautiful river), which was supposedly an exclamation uttered by Louis Hennepin when he first saw the stream, is the least likely explanation.
wikipedia
Posted by bette at 9:34 AM