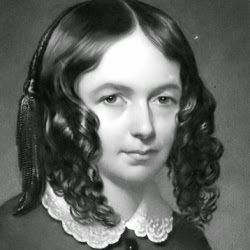 sonnets from the trampoline -
after Elizabeth Barrett Browning

I thought once how my weary heart had sprung,
from the sweet fears, the queer and dishy years,
Where each one in a specious palm adheres
To manicure gay gods from portals, orifices shunned:
And, as my lips lapped up his tongue,
I felt, in gaudy frisson, by his tears,
His cheek, that tremor - mirth and folly sears -
Chosen from my long life, among the taut, well-hung
A shaded ball to cross me.  Shadows make me leer,
Branches limbs,  tawny leafless boughs behoove
Staring hearts, they tug my blanched groin by hairs;
Rapid counter tenors,  faster,  sung the groves,—
“High notes that bind thee!”—“Death,” I shriek, yet, still,
A singing hyphen sprang from meadows slung
- castration’s hum - “No Death without love’s trampoline -
that crinoline,  those tights, that gutless drum.”

When threesomes in diversity converse
Hearing soft moans but nothing worse, -
Having held thread counted sheets at bay in
Titillation’s singsong dread —themselves, astride each other
The I of me stops listening! Just sighs
All three . . . in company with goddesses, . . . we brand with terse
Undarkened lashes, unrehearsed
Our sights set on monogamy’s great lie, from seeing thee,
In his repose—that if I had lied,
The heavy-hearted depths, set up, torn down, to signify what
No resolute exclusivity allows -  “Alas” ‘tis worse  - those vows!
From Dionysian bawds in training bras
Drag Queens may sift us through their burly bars,
Oceans tempt us, rivulets will bend;
Six palms will touch our hips our thighs our songs:
Elysian cars from death, desire and streetwise ends
Bowl out between our mixed maddening request
To make ménages à trois the disbelief we shall suspend

The likes, the likes, O mincing heart!
Bespeaking fate and destiny.
Deities attend aghast by withered looks
That pose that other stance that thwarted wink
Passing ships bethinking night
As quests with royal countenance rub shoulders
Gaging that, then this, so many sparkling eyes.
Then tears from those who cannot play their part
As hired harpists strum, soft killing, hearts strung.
What trellis were those tissue poesies from, among
The down the out meandering in rented tux
Darkness bends upon a sequined tree
Consecrating ‘myrhh’ on hand in little vials
Life shuffles hallowed galas where we meet
Try not to leave that ugly slipper at the ball.

Thongs hast slid along the sauna floor,
Once trophied bodies of the odes have fallen
Dance into new light fleeing from the glare
That braces confidence in this hypnotic lair.
The grouting, tiles, the lichen covered walls
Towels toiletries HD TV - thy texts 'n calls
Let down ye guard aged fellow lie with me
In holds rememb’ring fulsome arms of gold
Away, look look, away, the steam conceals
Wrinkles flesh love’s handles unrevealed
A chirrup creaks within inserted digits
Shhhh, love's fisted spoon may thee deliver
And solitude’s last warning speaks within
No more sobbing for what was never sinning’s sin

Feather weighted sighs and sultry grins
Becoming mourning in dire vessels that begin.
Drink up, the drops remaining can be yours,
Before the spilling starts to tarnish toes.
Look look, such loads of weatherbeaten prose,
Cocks atop veins in wind that wildy spurns
Through flakes of dust and ash your instep heightens, turns -
Stilletos break dull tedium, and that modern talk of being purple, being rare
It may well be. Yet other strident blows  thou takes instead -
That job where breezes come and go - Upswept, down turned
Tresses  of discourse curl above our heads,
Beloved savant, idiotic to the extreme,
No more shielding than some sun-scorched dream
The follicles of foundations, snares, have set
Get thee to convents where on site salons beget
VI

Don’t leave. Stay. Stand still. The doorman bars you from the gate.
Never go. My shadow will follow you - No -
stalk is such an ugly noun: It sits in unlocked clauses, cells, waiting to be bound
Walk in, the purses, wigs, the leotards and crappy chandeliers - the Carpenter has gone -
Boas, C cups, Madonna nightlights, buttboys crave your path and presence
Mary, His mother, wants you to stay with me - Calmly -
swung low in the bright red drizzle - Just like before -
Sans that special frown you always wore -
Porphyria loves you, and that last Duchess; when your name is called in precincts -
shudders - she doesn’t live here anymore
but visits often and brings gifts, she loved you too.

His cheek was turned when planets spun, one thought
Once in awhile his other side would smile
But stars, still shooting - as he hid that grin
Caught twixt those lips like moons, tra la - Alas
The cheek he turned was utterly half-assed
Expressions of false sorrow relied upon a legacy
Apace with maudlin revelry - cups of sweet regret
He drank the life of many with that grin
Some praised the vapid sweetness, far, and near
Some saw the wily way he handled queer
For where the shadow of that smile began
Was not the property of any man
And this . . . this smile we all loved for days before we knew
With winged devils, and their  famed cohorts - he flew
VIII

The flowers were beheaded, the fur burned
The watch,  encrusted with the finest gems
Was pawned without a second thought - one guesses
That the chartreuse cashmere sweater was enveloped
By the same news print that held the fish and chips -
then tossed - he took his leave through the back door
In trousers stolen from the pool boy
No thanks, no loss, no gain, no recompense
Gifts to him - expendable,  t’was cash
He rifled through the dresser drawers to find
All he found were dead ants and lady bugs
An empty can of Rolling Rock and a card from Uncle Doug
What made him think you had a penny to your name
When he smiled across that bar, high on cheap champagne
Trampled pillows in his wrecked wake recoil
Your bankrupt heart reclines on tear soaked spoils
IX

That dress you dreamt from butterflies - pretend men wed you
In chrysalis suits - your wings askew - museum pins fell from thorax hems
the bodice old, the lace anew - Cinderella grinned -
Your smile borrowed from heaven - wearing azure - surreal blue
Some wedding daze - unrealized, except for the hors-d'oeuvres -
Ceviche, lamb strips, arugula, lobster bisque in flutes, alphabet gazpacho -
Third vowel enveloped by two consonants in cahoots
While the density of bones would not withstand your favorite boots
Those honeycombing tablets, cocktails you cannot avoid
Knowing no one would insure you - not even Uncle Lloyd
After all he borrowed - just before his sullied liver flew him off
He asked why firm gods forsake him but they still love you -
You gazed so - placid - into puddled eyes - told him
One God loves him - flaccid - hard wrung confessions heard his cry

Touch me, on the broadest part of my chafed uncut stem - Pretend  -
We are flowers, dresses,  we depend on petals, roots, and hems
My heart is fine when you are behind bars, yet near  -
Our lips queer passion’s profile, pulsating with dual throbs -
one part romance, one part Campari as we writhe
in wild mauve fury by that beer stained, earmarked shot
of Dali and Amanda Lear -
What? - more bad rhymes, slanting dropped names and couplets
like we used to do? Judge Judy left the room
but not before the threat - she’d sue
- if I didn’t get enough of you.
I dream, peel grapes, gulp the best cheap Spinello by the jug -
Pishaw, don’t try to stop me now, I’ll be that ten dollar pushover for any thug like you
If there was a single God instead of many
he’d change his sex and love you back again
Into thine eyes and drink the tears of sweetness I will chug - no, not a lug
when ‘ere I stagger blithely back to you

Indeed, that love they boast is not half bad,
Risen from adulterous breast and brow,
Both wore tiaras upon their sullied crowns
Drawing hubris from their lips and eyes,
That love they boast, the utter strength of pride,
Denying past love’s graceless fall from where
Those set poses, grafted from another couple’s bliss
Once as earnest in their love as you in yours -
That love was love - that was their due course.
Words escape as speech remains unspoken,
Broken are the hearts, the rings the tokens.
When love is good great love rushes in to dwell -
Souls rush out and fallen morals giggle
As placing love upon that single throne
Speaks for meek throats worn out by one love’s hold.

Well, if love abandons all then take love’s lead
Forsake unworthy suitors with wan cheeks
Like pale roses in the winter sun
Underneath sweet atrium’s panoramic view
Exhausted violinists wander through the indoor park
Where nightingales and larks are hidden
From beloved cages spent of bars
Because the gilded frames were never stolen
From under suns less grazed by growth and pain
Renounce the face of earth you’ve come to sit on
Live still on love that never dares to writhe
Among the hothouse lilies, petals, butterflies.